The xcri-cap 1.2 feed produced by each institution as an outputs of the #coursedata programme can be used in a number of ways. As with many interoperability specifications there is a great deal of benefit for the internal systems having a recognised standard to build against. By writing to the specification a canonical set of coursedata can be established, ensuring that courses aren’t counted twice or not at all… and opening the door to the world of business analytics.
Jisc commissioned a number of coursedata use demonstration applications to pick up the feeds that are being produced by the #coursedata programme.
The #coursedata demonstrators generally work in one of two ways, either using a single feed, or an aggregated set of feeds.

An example of the single feed use is the Plymouth College of Art moodle block, which uses the data moodle holds about an existing student to identify opportunities for further study at the institution, and display it in a moodle block at appropriate times.
http://coursedata.blogspot.co.uk/ 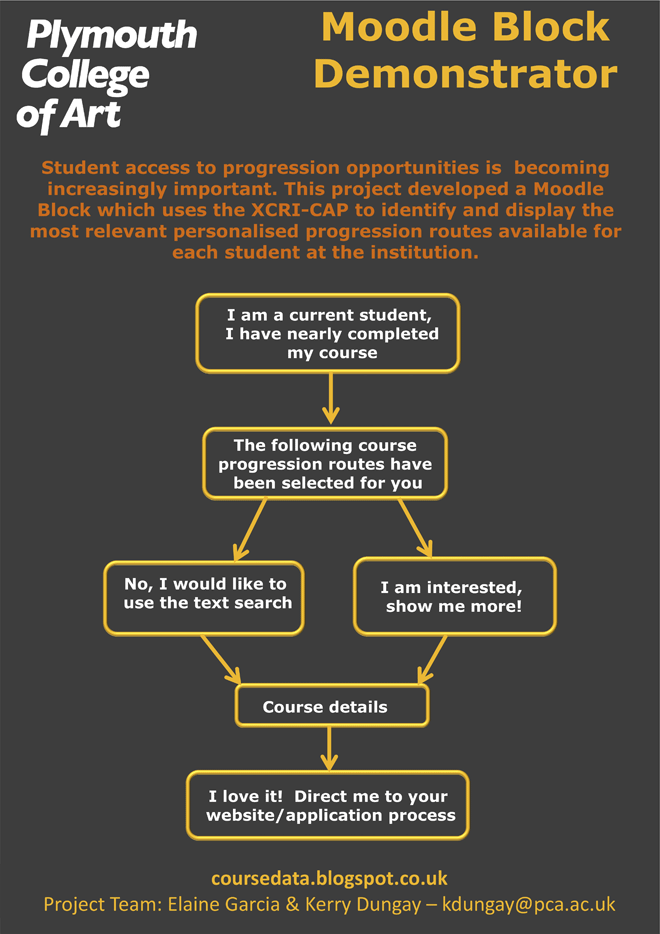 The Oxford CoMoBo application picks up on the institutional feed and works with registry systems to allow users to book courses.
http://mobileoxfordtech.posterous.com/

The benefits of looking at a set of aggregated feed can be seen in the Skills Dashboard application, which queries the Jisc Aggregator to determine which courses are being offered in which topics in which region.
http://skillsdashboard.gooii.com/

The facebook app provides a course search for institutional facebook sites. It could be built using a single feed, but in this case uses the Jisc feed aggregator API to filter query results.
http://www.facebook.com/XCRIcourseSearchApp

The AS-X widget uses an extensive thesaurus of terms mapped to a number of vocabularies and keyword lists commonly used in further and higher education to produce a set of search results.
http://alanepaull.wordpress.com/category/xcri/demonstrators/ax-s-widget/

The KIS app joins up the XCRI-CAP and KIS data sets to provide meaningful and practical outputs.
http://xcriwithkis.wordpress.com/

In addition to these demonstrators the Jisc Elevator project http://elevator.jisc.ac.uk/ at UCLAN has produced a range of mobile course discovery applications, the Creative Assembly have created a portal to search the aggregated feeds of a groups of arts courses, and the MUSKET project has built a range of tools with generate an xcri-cap feed from existing documents and then re-use the data.

Over the next few days I’ll look at each of these in detail, explain how they work and how they can be adapted to meet needs in other institutions.