Following conversations with representatives of a number of projects over the months since the Course Data programme began it has become increasingly apparent that there was a recognised need for some additional support and information around change management.

Change is at the core of so much project work and if it is not managed appropriately it can have major implications for the success or otherwise of a project.

We held a workshop for Course Data and other projects on Managing Change this week led by John Burke, a Senior Adviser at JISC infoNet.

A number of Course Data colleagues (some of whom also have Transformation project roles) participated in the workshop which took the form of a mix of theory and interactive elements. The main interactive element was a computer simulation depicting the realities in implementing change in the education environment.

One of the first activities we took part in involved identifying, from our own experiences, both positive and negative approaches and outcomes of change and change management. There were dozens of post-its filled in and stuck to the H forms on the wall with smiley faces to represent happy/good experiences and sad faces for the unhappier/bad experiences. Broadly the responses could be summarised as follows:

Bad change management as experienced by the workshop participants were the result of poor communication and consultation; changes happening too fast; increased pressure and workload experienced by those affected; lack of training to support the change; use of jargon which can confuse and alienate and ultimately lead to feelings of disempowerment; change for its own sake – lack of strategic vision and anything impacting negatively on staff morale. 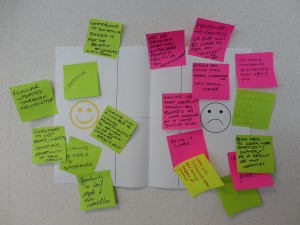 And the good…. a clear vision – so that even if you disagree with it you understand why it’s happening; good communication – someone happy to answer questions; structured change; obvious improvements made- bottlenecks removed, more appropriate and efficient systems resulting from the change; creative approaches used; fresh challenges and new opportunities resulting from the change and time for reflection available during the process.

John gave us an overview of Change theories – included drivers and strategies for change and he outlined some tools and approaches that could be used to help manage change successfully. Much of the content of the workshop relates to the Change Management infoKit which provides further details on the theories and tools that have been tried and tested within the sector.

The impact of change cannot be underestimated, John spoke about parallels between emotions of bereavement and emotions involved in change for some people.

The second half of the workshop was largely based around a computer simulation activity. The participants worked in pairs on a scenario which, whilst factual, had elements that were not too far away from the reality of managing change within a real educational environment, including having to be delivered within a certain timeframe.

This element of the workshop helped participants to consider the challenges involved in how stakeholders within an organisation can react to change, to consider cultural aspects of work environments, nurturing relationships, and to think about routes into influencing change. As the introduction to the exercise explained ‘changing the way people think and behave in organisations is not a simple task and often requires a combination of different tactics to be used at the right time with the right people’. Furthermore in this exercise, as in real-life, it is important to consider the context in which you are working; review and understand the different initiatives available; develop a strategy to guide you through the project – eg be it top-down or bottom-up; be resilient, things won’t always happen as quickly as you’d like and often not as planned; stay focused on the goal and review and evaluate progress at regular intervals. 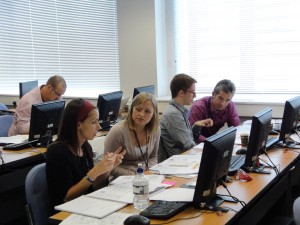 The simulation offers the user the chance to use ‘interventions’ in order to influence the progress of the project – it is important to nurture an understanding of the individual people that are involved in the project in order to get the best possible outcomes.  Working on the simulation in pairs offered delegates the chance to talk through  potential implications and consequences of making certain decisions.

On a side note I talked to John about the reason behind using pairs to work on the simulation and he explained that his experience has shown that when people have worked on the simulation by themselves they have been more likely to treat it as more of a game – they’ve taken it less seriously; and when he has tried the exercise in groups of three it is often the case that one team member feels that their voice is not being heard in the decision-making process. 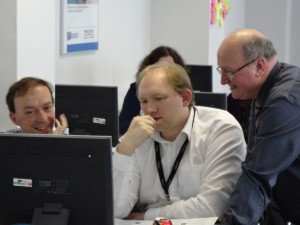 We used an instant feedback approach (which would be followed by a more formal post-event feedback survey) at the end of the session to find out what delegates thought about the day and the types of approaches that had been introduced.  Using pictures and post-its can be a very valuable way of getting an instant idea of what has been useful to the participant, what they really like, could use now, could use later and what isn’t relevant to them. 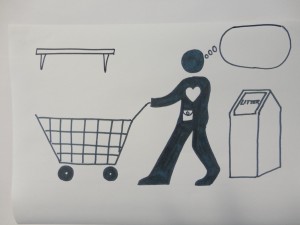 Instant feedback using pictures - trolley for ideas that participants will take back to their projects, shelf for ideas for the future, what to think about, what to discard in the litter bin, what was loved (heart) and what can be put 'in the pocket' for instant use. 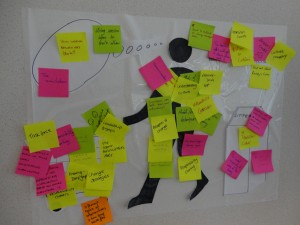 Feedback on the exercise, and indeed the workshop, has so far been very good, and participants have already suggested ways in which some of the tools and techniques can be used within project activities.

A collection of Change Management related resources (including links to some of the tools and techniques used and the Change Management infoKit) was compiled that may prove useful to anyone dealing with change within projects and organisations more generally.

Thanks to everyone for participating so enthusiastically and to John for leading the day.