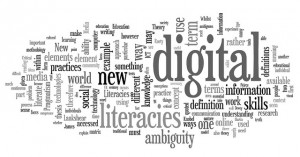 An article by JISC Programme Manager Sarah Knight in last week’s Guardian highlighted the work of JISC in the digital literacies arena over the last few years:

Work by the JISC/British Library commissioned Researchers of Tomorrow team shows that there is little difference in the capabilities of younger and older students when it comes to online research. Most learners use only basic functionality and are reluctant to explore the capabilities of technology, preferring to passively consume content rather than create or curate it. The same study into young post doctorate researchers’ behaviour shows that they are unaware of some of the digital tools available to them.

Looking at the other side of the coin, universities and colleges do not always take sufficient steps to help their students acquire these skills. A JISC report, Thriving in the 21st century, found that there is poor support for learners to make effective use of technologies for learning, and in some institutions there are still barriers to the use of personal technologies, such as mobile phones, and social networks, such as Facebook. Tutors are still insufficiently competent and confident with digital technologies for learning, despite evidence that tutor skills and confidence with technology are critical to learners’ development. There is also often a lack of opportunity and motivation for learners to integrate digital literacy in authentic tasks.

The article goes on to flag up the current JISC Developing Digital Literacies programme.

Read the article in full at the Guardian website.